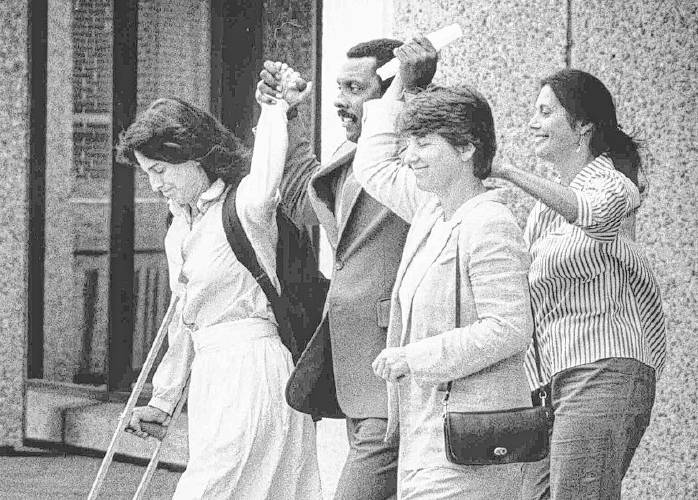 Forty-one years ago, on November 3, 1979, at approximately 11:20 AM on a bright Saturday morning, nine carloads of Ku Klux Klan (KKK) and American Nazi Party members drove into the preparation site for an anti-Klan March and Conference. The purpose of the March and Conference was to unite Black and white workers in the surrounding textile mills and to facilitate community building between the workers and Greensboro’s broader Black population. Upon their arrival, the attackers shot and killed five people, wounded ten others, and terrorized a poor Black public housing community.

The Greensboro police had a paid Klan police informant, Edward Dawson, among the white supremacists who perpetrated the attack. The Federal Bureau of Alcohol, Tobacco and Firearms (BATF) also had an undercover agent, Bernard Butkovich, who was among the Nazis.  While both informants passed on information to the police, both also seemed to have acted in complicity with the aims of the white supremacist groups. Dawson led the Klan-Nazi car caravan on November 3 directly to the March starting point at Morningside Homes, guided by a copy of the organizers’ parade permit handed to him by the Greensboro police a few days earlier.

Rev. Steve Allen, a former lawyer and judge, and the current President of the Greensboro Pulpit Forum, said: “We as an association of clergy joined the survivors in demanding an apology from the City of Greensboro in October of 2019 for a grievous wrong that occurred in our City.  We did not see how our city could grow into its full potential as long as the gravity of this evil act in which the Greensboro Police was deeply complicit remained unacknowledged by city leaders.”

The apology acknowledges that the Greensboro Police Department (GPD) knew well in advance that the white supremacists planned to attack the march and conference participants and that they were heavily armed. Though the March planners had secured a legal parade permit, and though the GPD had extensive advance knowledge of the motives and presence of the heavily armed attackers, and were surveilling the movements of the Klan/Nazi caravan on the day of the murders, no police were present to warn or protect the marchers or the community.

In two subsequent criminal trials with all white juries, one for murder and the other for violation of civil rights, all Klan and Nazi members were acquitted.  In 1985, in a civil suit brought by survivors, a jury with one black member found Klan and Nazi members, together with Greensboro police officers, jointly liable for one death—Dr. Michael Nathan’s.  This was the first time in the history of the nation that Klansmen, Nazis and police officers were found jointly liable for wrongful death.  The City of Greensboro paid the $351,000 liability but strongly denied any wrongdoing at that time.  The Klan and Nazis paid nothing.

The apology issued by the City Council also announced that beginning in 2021, the City would award annual scholarships to five graduating seniors of Dudley High School, a historic, predominantly black Greensboro high school.  Each scholarship would be in the amount of $1,979 dollars, and would be given in the names of Cesar Cauce, Michael Nathan, William Sampson, Sandra Neely Smith and James Waller, during the Annual Citywide Rev. Dr. Martin Luther King Jr. Day Breakfast. The apology document states: “The scholarships will be awarded to individuals who submit an entry focusing on the issues of racial and social justice that help this community reconcile the remaining vestiges of the events of November 3, 1979 and that may even help city officials understand these issues in the context of future events in this community and around the nation.”

This decision ensures that the names of the five people killed would be called publicly and respectfully each year instead of being demonized and dismissed as “Communists.”

Former Greensboro Mayor and current Mayor pro term Yvonne Johnson, who offered a personal apology during the 40th Anniversary Commemoration of the Greensboro Massacre in November of 2019, said: “I am sad that it took us so long to squarely face this matter, but I am glad we finally did.”

It is worth noting that Greensboro is the home of the nation’s first sit-in movement on February 1, 1960, growing out of the brave actions of four freshmen students from North Carolina A&T State University, a historically Black institution.   Greensboro also initiated the nation’s first Truth and Reconciliation Commission (2004-2006) which studied the 1979 Massacre and was advised by Archbishop Desmond Tutu and Truth Commissioners from South Africa and Peru. The City refused to endorse the Commission during its work.

Rev. Nelson Johnson, one of the organizers of the planned march and conference that ended in the attack, linked the 1979 murders, police complicity, and their aftermath to the nation’s current struggle with issues of police brutality and white supremacy : “Forty-one years of denial and blaming the victims is completely consistent with what we see now in the wake of the murders of George Floyd and Breonna Taylor and in the related demonizing and marginalizing of the Movement for Black Lives (MBL). In fact, the effort to get justice locally in Greensboro for the outrageous police murder of Marcus Smith in 2018 is part of the same movement, in that Marcus’s death reflects everything the Movement for Black Lives has been marching against.” Marcus Smith was a young black man who died after being hog-tied and  brutally restrained by Greensboro police.

Rev. Johnson continued: “We are grateful for this day; I know the widows and all the survivors are grateful as well. It has been a long, difficult journey from 1979 to this day.”

Our nation is at a crossroads. Across America, local communities are confronting a police culture that has too often seen white supremacists as “heavily armed friendlies.”  These white supremacist forces–direct descendants of the KKK and the fascist movements of the 1930s –have been unleashed by the divisive rhetoric emanating from the highest levels of our political system all the way down to local cops who welcome armed white vigilantes into the streets of our cities to attack peaceful demonstrators.

What the members of the Greensboro City Council have finally done is a crucial step in the right direction. The current atmosphere of fear, falsehoods and threats of massive force in our nation is eerily similar to the atmosphere in Greensboro in the days, months and years following the Massacre. This, however, is also an extraordinary moment, as the state of our national politics has created an opening for acknowledgement and healing of the wounds of racism and violence that have shaped our nation’s character.

The question is, will we, the People of the United States, be strong and courageous enough to confront the realities of our flawed democracy, our flawed financial system, and our flawed policing and justice system or will we allow the forces of racism, fear, bullying and ignorance continue to run our country’s politics—a politics that has resulted in massive and growing poverty at the bottom while the billionaire class wallows in obscene levels of wealth at the top.

This is a small but deeply significant step towards greater truth, justice and healing in Greensboro, even if over 40 years late.  Could it also be the beginning of a national Truth, Justice and Reconciliation process for America that might finally lead to a greater measure of acknowledgement, truth, healing and the moral and systemic changes America so desperately needs?

-The photo shows Marty Nathan, Rev. Nelson Johnson and widows Dale Sampson and Signe Waller in 1985 after a jury found the Ku Klux Klan and neo-Nazis liable for the killing of Nathan’s husband, Michael, in the Greensboro Massacre of 1985.

“The Markham-Nathan Fund knows the needs of the community and understands the local organizations, so to be funded by them is a great honor because it means that local people appreciate our work.”